June 1978. The wave had crashed on the Topographic Ocean.

The members of the band Yes were finishing up recording sessions for their upcoming ninth studio album, Yes Tor. For the first time in several years, things weren’t going well. From 1971-77, Yes had made a series of albums that earned them a devoted fan base. Even the skeptics had to confess that Close to the Edge was something close to beautiful.

Led by the deeply, but non-denominationally spiritual Jon Anderson, Yes had reconstituted the dregs of late ‘60s Flower Power for the early ‘70s. Theirs was an aspirational, utopian worldview: earnest, striving, and completely unapologetic.

In ‘78, Yes was coming off of the high from their eighth LP, Going for the One, which — true to its name — had been a number one album in the UK. It also spawned the top ten hit single “Wonderous Stories,” and it reinstated the band’s critical reputation, which had taken a hit after the rock press panned their ambitious double album Tales from Topographic Oceans.

But, while Yes had been scrambling for some way to focus their sprawling, mystical, virtuosic music into a more contemporary format, a change had come over their native England. Economic recession was casting an ever-darker cultural shadow, and a burgeoning subculture of leather-clad, spiky-haired young people was beginning to speak out against “bombastic” music like Yes, Pink Floyd and King Crimson. It was out with Jon Anderson’s post-psychedelic utopian visions, and in with Johnny Rotten’s disillusionment and cynicism.

During the Yes Tor sessions, guitarist Steve Howe, bassist Chris Squire and drummer Alan White tried to push the band towards this brave new reality, like the Rolling Stones had just done on Some Girls. But, if we are to believe what we read in CD liner notes, Anderson wasn’t having it. So, the band’s tentative motions towards new wave were forced to coexist with Anderson’s latter-day hippie sensibilities. Nowhere is this more obvious than on Anderson’s last utopian prophecy of the 1970s: a song called “Circus of Heaven.”

Musically, the track is a botched attempt at the newly-popular genre of reggae. Or, it might be — it’s actually so unconvincing that it’s difficult to tell if that’s what the band was going for or not. But Anderson’s lyrics are a characteristic flight of fancy. They tell the story of “the very final day,” when a Midwestern town is visited by the titular circus: an event that confirms the existence of not just angels, but also unicorns, fairies, elves and centaurs. A deity called “the seventh lord of the seventh age” presides over the event. The locals gaze upon him in wonder.

But, the story concludes on a sour note: possibly the first moment of Yes’s career not defined by ruthless optimism. (They’re called “Yes,” for heaven’s sake.) After the circus packs up and heads off to astonish some other world, Anderson imagines himself walking away from the circus grounds with his six-year-old son. Anderson proclaims with typical ebullience: “Wasn’t that something beautiful, amazing, wonderful, extraordinary, beautiful?” The boy (voiced on the record by Anderson’s actual son, Damion) is curiously unmoved:

“Oh, it was okay. But there was no clowns! Or lions, or tigers, or bears! No candyfloss, or toffee apples. No clowns.”

Maybe this reflects how Anderson was feeling about the musical trends of the time. Even from within his own band, he was being confronted with the possibility that his aesthetic was becoming passé. But, any move away from that aesthetic — any gesture of appeasement towards the growing ranks of Yes detractors — would be a betrayal of the cause. If music is meant to be the vehicle for the grandest feats of human accomplishment and for the enrichment of the spirit, how could a band stop striving for that? Anderson was stuck. Fitting, then, that his final prophecy should end with a discordant note of cynicism.

There are plenty of moments that could mark the point where progressive rock turned a fatal corner. There’s Emerson, Lake and Palmer’s lavish 1977-78 tour, which was savaged in the music magazines and nearly bankrupted them. There are Gentle Giant’s tepid attempts to crack the singles chart after 1976. And there’s “Circus of Heaven”: the moment when punk rock made a cynic of Jon Anderson. Really, how could he not be cynical of a world that would willingly trade the spectacular for the self-consciously mundane? King Crimson for the Sex Pistols? Angels for clowns?

Between June and September of 1978, Yes succumbed to irony for the first time in their career. The design studio Hipgnosis turned in some lacklustre artwork for Yes Tor’s cover and the band’s famously mercurial keyboardist, Rick Wakeman, hurled a tomato at it. In what one can only assume was a collective fit of acute despondency, the band just decided to leave it that way, prompting a last-minute change of the album’s title. 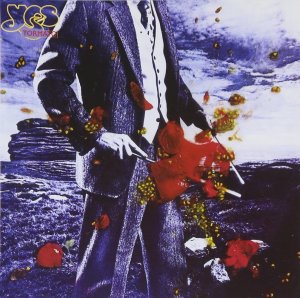 Tormato was released on September 20, 1978. The record was not well received. “Circus of Heaven” was singled out for particular ridicule. Shortly after, Anderson and Wakeman left the band, the latter for the second time.

It would never quite be the same for Yes, after this. They would never recapture the wide-eyed sincerity of their best music. But, for a brief moment, from the late ’60s to about 1975, the world had bought into Jon Anderson’s utopian prophecies. And the music didn’t stop, even after the circus had left town.

Circus Of Heaven is an ongoing, album-by-album critical history of progressive rock. It focusses specifically on the discographies of ten especially influential bands (the Lords of the Seventh Age, if you like), whose identities will be dramatically unveiled one at a time as they enter the narrative. Periodically, we’ll step outside of those ten discographies to get a broader sense of what’s happening in prog and in popular music more generally.

You can find a chronological list of posts here, and an ongoing annotated bibliography here.

3 thoughts on “About the Circus”